Even though I haven't been writing here much, things have been moving along nicely in the gym, so I thought it would be good to review what happened this year as we get ready to move into 2018.

The Bad and the Ugly

Overall I had a great year, but I'm not going to pretend that everything was perfect.

I had some nagging injury/pain issues that were extremely irritating and quite de-motivating.

The first was my right knee.

Somewhere along the way that knee started interfering with my squats.

At first it was just a sharp pain that kicked in after the set was over, but soon it morphed into something that prevented me from finishing my set at all.

This is basically how I started my year.

I was up in the high 200's when I started the year (like 270 or so), but by the time February rolled around I found myself unable to complete all my sets at weights as low as 115.

If I'm being completely honest, there was a point where I felt like I would not be able to squat again.

I had almost given up hope.

Were it not for my Starting Strength Online coach, Dan Flanick, I probably would have given up and moved on to a program that didn't involve squats.

Thankfully, the story doesn't end there though.

I also had some issues on the deadlift.

I tweaked my back 3-4 times over the course of the year, to the point where we had to change course on those too.

Instead of going up more frequently, we instituted light days with higher reps to help drill in the form.

More on that later too.

I guess the moral of the story is that when you start getting a little older and hitting heavier weights, things can happen.

Form gets more important as age and past injuries stack up.

That's not to say form isn't important for the 20-something lifter who has "poisonous" levels of testosterone and recovers quickly, but it's a different factor.

I gained more weight than I intended.

There's multiple reasons for this, but one of the things you hear a lot with Starting Strength is that you need to eat a lot to keep your gains up.

And this is probably true for skinny people, or young people, or people who don't gain weight easily.

Sadly, I'm none of these things!

And when my squat weight went way down (and my deadlift), I continued to eat like I was lifting heavy.

Long story short, I started the program at about 230 and am currently walking around at 270.

Here's the thing though...

When I was 230, I had back pain, some knee pain and some other stuff.

Now I'm 270, and I've gained a bunch of fat that is ugly, but also a large amount of muscle.

I also don't have the back and knee pain I had when I was lighter, because my muscles, tendons and joints are stronger.

Now this is not a defense of being fat, just an observation.

All things being equal, I'd rather be strong and look good! 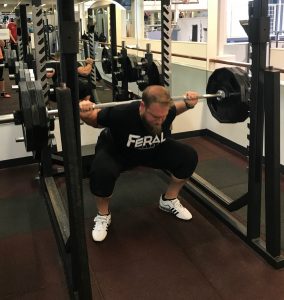 Now that we've gotten the bad and the ugly out of the way, let's talk about the good!

Despite some setbacks that almost derailed me, I didn't quit.

I swallowed my pride and dropped my weight on the squat and deadlift to focus on form.

I worked my squat back up from 135x5x3 to set many new PRs over the course of the rest of the year.

Same for the deadlift.

In fact, I hit PRs on all of my lifts late in the year, pushing past sticking points that had hindered me before.

And I've been injury free for several months now!

When I was in the midst of my squat troubles, I enlisted the help of Starting Strength Coach Niki Sims at the Atlanta Barbell.

She gave me some pointers that helped get me on my way, and I don't think there's any substitute for having a skilled coach there in person.

Even if you can't afford it regularly, do it once in a while.

You can find a Starting Strength Coach here.

It was cool to get a chance to get coaching in-person from her and also visit that gym.

At one point I had the thought of attempting to take the certification to become a coach, but ultimately decided not to, an d that was probably the right decision.

However, the seminar was a tremendous experience, both training and academic.

I got to hear the man himself lecture on some of the principles of the system, as well as other incredibly talented and educated coaches.

It wasn't cheap and it was an exhausting few days, but I would say it was well worth all the effort to go.

If you want to learn more than you ever thought possible about lifting, definitely consider attending a seminar if you get the chance. 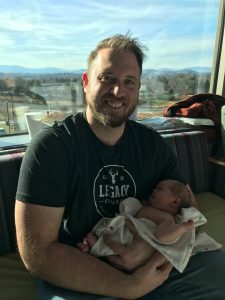 I took the last two weeks of the year off from the gym.

Why would I do that?

Because my wife and I had our third child on December 19th!

We went into the hospital on a Monday, so I didn't make it into the gym that day, then got caught in the craziness of having a new baby in the house.

Of course I wouldn't change any of it!

Even though I've used this picture once already in this post, and it's been on the site before... I'm going to use it again!

I went way heavier than I ever thought I would on the squat, and I still have room to go up.

Here are my best efforts from this year:

So I'll close out this post by talking about my goals for the new year.

The first part of the year is going to focus on dropping some weight.

I'd like to lose at least 30 pounds before I start focusing on getting big again, by the end of March.

I want to get bigger, but not at my current bodyfat percentage!

I've enlisted the help of SSOC's registered dietician to get my nutrition on track to lose fat, while losing as little strength as possible.

I will get my CSCS designation before the end of the first quarter of the year.

I need to retake part of the test in order to do this, and I need to get back into my books so I'm ready to pass.

I will coach my first paying trainee this year, after I get the CSCS.

One of my local gyms will let me coach with a designation and insurance, so once I pass the test and get the coverage, I'm going to sign up with them as a trainer.

I'm not looking to make this a full-time gig at the moment, but I want to take a select few people who are interested in getting strong and train them in the Starting Strength method.

I got a good deal accomplished, and I want to take 2018 a few steps further.

I'm actually pretty pumped that my first workout of the new year takes place on January 1, 2018 and I can't wait to crack open my new notebook and get started on the next chapter of my lifting career.

So what's on your plate?

Do you have any particular goals in the gym for this coming year?